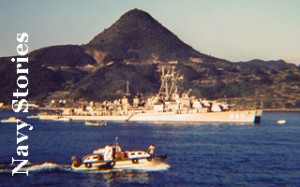 Sasebo, Japan was my first serious introduction to foreign travel as an adult, thanks to the navy.  The trip over in October 1954 from Athens, Georgia’s Navy Supply Corps School was a 6-week nightmare, as documented in The Mother of all Journeys.  It is complete with pictures and includes one of a dead propeller on a Marine R5D (DC6-B) while flying at 8,000 feet on a freight route between Hawaii and Tokyo Bay, a journey that normally required several stops and refueling.  We landed on Johnson Island, which is just large enough for a landing strip, but contained a repair facility and an officer’s club that opened at 12:00 noon each day.  Seven days later our plane was repaired for the balance of the trip.  The picture is of Sasebo Bay and some US Navy ships nicely anchored with Jane Russell mountain in the background.  Johnson Island was the only relaxing segment of the overseas trip.