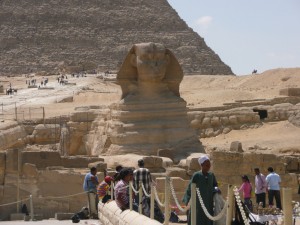 Luckily we visited Egypt while Greece was burning.  Now that Egypt is on fire, we can say we got out just in time.  Our first surprise was that the pyramids are essentially a suburb of Cairo, rather than in some remote desert.  Of course Cairo is in a remote desert with a river running through it.  The second surprise was that the sphinx is immediately between the pyramids and the river, as shown here.  We visited both and more in a single trip.  Four bus loads of cruisers were accompanied from Alexandria to Cairo with guards in each bus and a motorcycle escort everywhere we went.  This was on our first repositioning cruise on Azamara’s “Quest” in the Spring of 2011.  It covered the vast expanse from Singapore to Greece through the Suez Canal.  We spent three days in a convoy with armed patrol vessels avoiding the Somalia pirates.  Our discovery of Azamara Club Cruises was the best surprise of all.