Montserrat is a subtropical paradise visited by Columbus on his second trip to the new world.  In 1995 the dormant volcano on the island’s southern end erupted, and made the capital city of Plymouth virtually uninhabitable.  At one time the island’s population was about 13,000 inhabitants.  The 3-5,000 that remain since the several eruptions live almost normal lives on the northern part of the small island.

As the Quest’s itinerary passed by Montserrat, the captain made a slow pass by Plymouth to provide close-up views of the volcanic destruction.  He turned a full 360 degree circle a short distance off shore, then returned to his usual route.  These pictures are a special attraction not on the published itinerary.  All the pictures have been enhanced by Photoshop and produced some atypical results, probably due to the cloud and /or volcanic dust surrounding the mountain.

The final picture is of the Giant Ditch Frog, also known as the Mountain Chicken by natives on Montserrat.  It is listed as highly endangered for several reasons, and was nicely populated on Montserrat and one other island during the past few hundred years.  As suggested by its name, Mountain Chicken, you know it is a delicacy.  It’s mating habits are unusual for frog species, and may explain its difficulty adapting, besides the fact that much of its habitat, the volcanic mountain, killed many of them.  (Picture by Wikipedia) 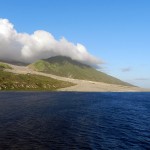 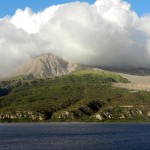 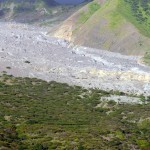 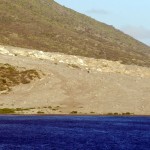 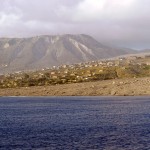 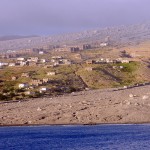 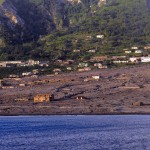 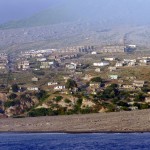 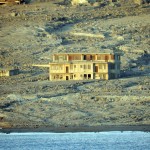 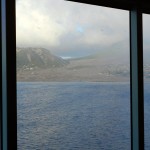 Plymouth from deck of the Quest 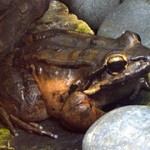